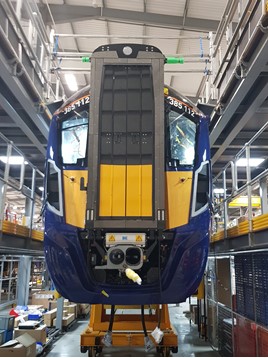 Hitachi has confirmed to RAIL that new windscreens are to be fitted to ScotRail’s new Class 385s, which are already late entering traffic because of infrastructure problems.

The Japanese manufacturer is building 70 electric multiple units for SR. These were due to enter traffic last year, but infrastructure delays prevented their main line testing. Once that began, drivers’ union ASLEF said modifications were needed to the windscreens, and that unless these were made the drivers would not drive the units.

On April 4, a Hitachi spokesman told RAIL: “We are currently working with manufacturers and partners on viable solutions. Once the solution is agreed, windscreens will undergo rigorous testing - working with ScotRail, regulators and unions - before the trains enter service.”

No date for this has been provided by either the manufacturer or the operator.

ScotRail spokesman Angus Duncan said recent reports of delays of 12-18 months for the trains were false, telling RAIL: “The ‘385s’ will be in service as soon as Hitachi has resolved the problems, and testing is completed successfully.”
Speaking in February, when the windscreen problems were discovered, Kevin Lindsay, ASLEF’s organiser in Scotland, said: “The windscreen is curved and, at night, is making drivers see two signals. It’s like looking through a fish bowl all the time.”