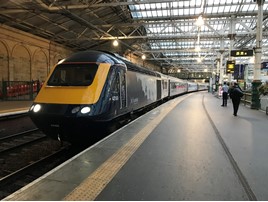 Delays to the refurbishment of Mk 3 coaches at Wabtec Rail, Doncaster meant that SR’s plan to introduce HSTs on the Aberdeen-Edinburgh route at the start of the May timetable was missed.

SR had planned that the first HST would arrive in Scotland in February for staff training ahead of its entry into traffic. The operator has been training with unrefurbished HST Mk3s since last autumn.

Chris Tait, ScotRail’s High-Speed Trains Project Manager, said: “I’m delighted that the first of our iconic trains has arrived in Scotland. They will transform rail travel in Scotland by providing more seats and a much-improved on-board environment.”

George Davidson, Transport Scotland’s Rolling Stock Manager, said: “This is an important milestone in our efforts to improve capacity on our rail services, alongside an enhanced passenger experience. It’s great to see the first of these trains arrive in Scotland and I’m sure they will make a great addition to the ScotRail fleet.”