ScotRail punctuality at its highest for two years 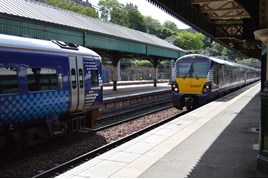 ScotRail recorded its best performance since May 2015 in the four weeks to September 16.

Public Performance Measurement (PPM) was 94.1%, the best since the month after Abellio took over operation of SR. This takes the operator’s Moving Annual Average (the average performance over the past 12 months) to 91.21%, which meets the regulatory target.

“For us to achieve our best performance in more than two years is down to the hard work of our people, who continue to go above and beyond to help customers travel about hassle-free,” said ScotRail Alliance Operations Director Perry Ramsey.

“But we are far from complacent. We know that customers want us to get even better, and we are delivering the investment to make that happen.”

Humza Yousaf, Minister for Transport and the Islands, said: “ScotRail has come a long way since the Performance Improvement Plan (PIP) was implemented a year ago. While it is now above PIP levels, ScotRail is maintaining focus on continued improvement as ‘business as usual’.

“The very real efforts to lift performance is a credit to all the staff who have worked hard to deliver this in the face of unrelenting, often unwarranted, criticism. I am not complacent and will continue to monitor performance as ScotRail works hard to build the best railway Scotland has ever had.”