ScotRail picks up the pace on ‘active travel’ Class 153s 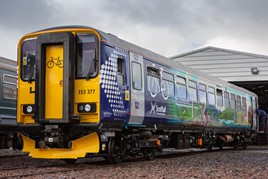 ScotRail has revealed its first ‘active travel’ Class 153 which will eventually be used on the West Highland Line.

Five single-car diesel multiple units are being refurbished by Brodies at Kilmarnock. The work includes stripping the interior of the ‘153s’ to create space for carrying cycles and large sporting equipment.

A ScotRail source explained that driver training has restarted within the company, with additional safety measures agreed with drivers’ union ASLEF. The Class 153s will form part of that agreement.

Each DMU will have 24 seats (20 around tables and four airline-style), with the rest of the vehicle able to carry up to 20 cycles via custom-designed racks, sporting equipment, and large items of luggage. There are spaces for tandem cycles as well as an e-bike charging socket - a first for a UK train.