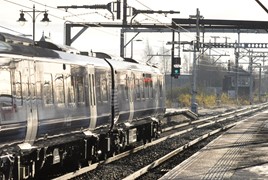 Electric trains have begun running to Stirling, Alloa and Dunblane, as part of a new timetable introduced by ScotRail in December.

The first trains to carry passengers ran late on December 8, as positioning moves to get electric multiple units (EMUs) into position for the first trains the following day. They are operating on newly energised parts of the Scottish network, which were completed during the autumn.

The electric services run from both Edinburgh Waverley and Glasgow Queen Street. This involves a sharp increase in the number of new Hitachi Class 385 EMUs in traffic in Scotland.

SR’s new timetable also features the introduction of a new direct service between Glasgow Queen Street and Edinburgh Waverley running via Cumbernauld and Falkirk Grahamston, which uses the new ‘385s’.