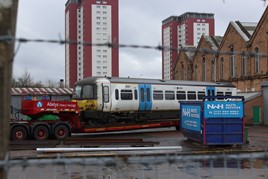 Three Class 365s have been leased by ScotRail, with more to follow. They will be used on an interim basis on the Edinburgh-Glasgow Queen Street via Falkirk High route while windscreen modifications are made to Class 385s.

The four-car ‘365s’ have been replaced at Govia Thameslink Railway by Class 700s. First to move to Knorr-Bremse Rail Services Springburn for modifications and re-livery into Scotland’s Railways colours was 365523, which arrived by road from Ilford on April 22, followed by 365513 on April 29. 365517 is due to arrive by road this weekend.

There is no official date for the trains entering traffic (July has been mentioned by sources), nor the exact number to be leased, although ten has been suggested. They will enter traffic once an agreement with unions has been made and once are sufficient crews are trained on the electric multiple units.