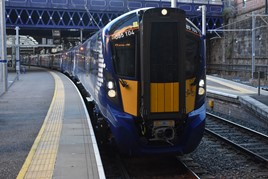 One pair of trains, four-car 385104 and three-car 385003, entered revenue service on Tuesday July 24 running as a seven-car service. ScotRail had provisionally accepted the pair (and began paying lease charges) the previous Friday, and on July 23 the ‘385s’ ran a 1252 Glasgow Queen Street-Edinburgh Waverley special for invited guests, including staff and stakeholders.

Speaking to RAIL after this run, ScotRail Managing Director Alex Hynes said he expected a full Edinburgh-Glasgow operation with Class 385s by the autumn, explaining that to do this ScotRail needed Hitachi to deliver 12 three-car and 12 four-car trains. He said that ScotRail was still finalising December’s timetable change, but that he expected end-to-end journey times of 42 minutes to appear from the change. He said accelerating all services would take place next year, although he wouldn’t confirm whether that would be May or December.

Hynes also retains his aspiration for 39-minute journeys, which he first revealed in RAIL 846: “It looks totally doable if we put some system thinking together.”

Meanwhile, ScotRail is now running electric services to Falkirk Grahamston, and Hynes said he expected electric trains to run beyond there to Stirling and Alloa by December. “Electrification is going really well,” he said, adding that he expected the wires to Alloa to be energised in October.