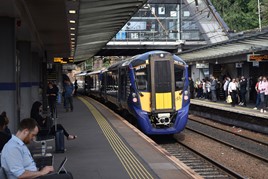 ScotRail says it has recorded its best four-week punctuality since September 2018 with more than 90% of trains running on time between June 23 and July 20.

Over the period, 90.7% of ScotRail trains met the Public Performance Measure by arriving within 4 minutes 59 seconds of their timetabled arrival time having called at all scheduled stations. ScotRail also claims the moving annual average – the average performance for the year – also increased for the second consecutive four-week period to 87.7%.