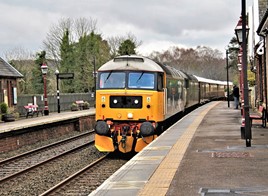 A new thrice-daily charter over the Settle-Carlisle Line could herald a new model for passenger trains, if a trial taking place this summer proves successful.

Operated by Locomotive Services Limited, the new services start on July 20 and will run for eight weeks.

The trains will be formed of four of LSL’s newly acquired ex-Greater Anglia Mk 3 First Open carriages plus a Mk 2 Brake First Corridor (not for public use), topped and tailed with LSL Class 47s.

Adrian Quine, a director of Rail Charter Services, which is promoting the services, said this summer’s trial has an “element of concept proving”, but that he was hopeful the model could be rolled out across the country.

“If we’re successful, then absolutely there could be opportunities to look at other routes, but it is early days. In terms of the longer term, this is a good concept,” he told RAIL in an exclusive interview.

“With the massive changes we’re going to see in the industry, there is a market for these kinds of services to operate alongside TOCs at times when TOCs can’t be sure of their capacity - for instance, where there are spikes in overcrowding or because the TOCs have the wrong rolling stock.

“It’s not dissimilar to supermarkets ordering in more ice-creams in the summer months or airlines running charter flights during busy periods. It’s an interesting model which could be rolled out further.”

The S&C charters will only offer day return fares. And while social distancing remains active, passengers will only be able to book in multiples of two, with prices from £29 per person. Only the window seats will be available to book.

Quine, a founder of open access operator Alliance Rail, said the trains have been launched to take pressure off Northern’s services along the scenic route. They will also target the day-tripper market rather than enthusiasts, with optional onward excursions expected to be offered to the Lake District and to the South Tynedale Steam Railway.

“This is pretty unprecedented on the main line, because it would normally be classed as a rival timetabled service and be distractive,” said Quine.

“The Department for Transport has asked the Rail Delivery Group to come up with some innovative solutions and we persuaded them this would be a good way of showing dynamism and solving the problem without being seen to be predatory.”