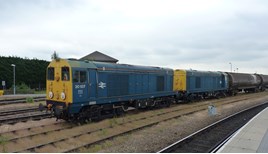 New rules on the operation of heritage vehicles have been proposed by RSSB (Rail Safety and Standards Board).

Respondents have until August 18 to comment on three new sets of standards, which could come into effect in the organisation’s December catalogue. It follows a review recommended by the Rail Accident Investigation Branch (RAIB) in its report into the Wootton Bassett incident on March 7 2015, in which steam locomotive 34067 Tangmere passed a signal at danger (RAIL 771). RSSB was also requested to review the standards by the charter train safety group.

Although two of the three proposed new sets of standards update existing versions, they now encompass diesel and electric traction as well as coaching stock. The previous equivalents only covered steam locomotives.

Harry Needle Railroad Company Managing Director Harry Needle had voiced concerns that the proposals could threaten his business, which overhauls and hires locomotives dating from the 1960s. Additionally, GB Railfreight MD John Smith suggested it could potentially affect his business, as GBRf hires ‘20s’ and ‘86s’.

RSSB said: “For as long as HSTs continue in regular main line service, then they cannot be considered as heritage vehicles.” It says this is a continuation of a principle contained in former Railway Group Standard GM/RT2000.