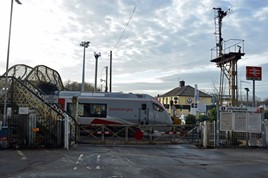 Semaphore signalling is being removed from the Wherry Lines (Norwich to Great Yarmouth and Lowestoft), in a project that is closing the branches for almost a month.

Level crossings are also being modernised and six signal boxes closed as Network Rail completes a project that should have been finished last year, but which was delayed due to problems with the equipment installed. As a result, the Reedham-Great Yarmouth route via Berney Arms closed in October 2018 and has yet to reopen.