Rolling stock options to be considered for CrossCountry routes 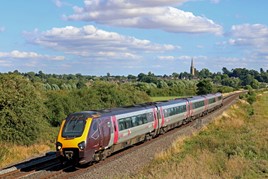 Reducing overcrowding will be a key priority for the CrossCountry franchise, according to Baroness Sugg, although she has offered no indication as to how this would be achieved.

She made the claim in a House of Lords Written Reply on October 22, having been asked by Lord Bradshaw (Liberal Democrat) what steps would be taken by Government to reduce overcrowding on the XC network now that bidding for the franchise has been cancelled (RAIL 861).

“Reducing overcrowding will be a key priority as we consider future options for the franchise,” said Sugg.

“The Department will consider rolling stock and train service options that will reduce overcrowding, but it is too early, at present, to say what the detail of that will be.”
It was confirmed in mid-October that the XC franchise currently operated by Arriva could be extended by five years (RAIL 864).

XC uses four-car and five-car Class 220/221s on long-distance services, as well as two-car and three-car Class 170s on inter-regional routes such as Cardiff-Nottingham and Birmingham New Street-Stansted Airport.

When Arriva took over the franchise in November 2007, it introduced five High Speed Trains to help tackle overcrowding on long-distance routes, although usually there are only three per day in traffic.