RMT warns ScotRail over use of ‘classic’ HSTs 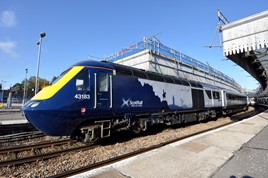 The RMT union is demanding that no ‘classic’ High Speed Trains are introduced by ScotRail, because they are not fitted with controlled emission toilets (CETs).

The union claims that SR’s planned introduction of unrefurbished sets as an interim measure breaks an agreement (meant to come into force last December) not to dispose of human waste on the track.

SR plans to introduce up to ten ‘classic’ HSTs as an interim measure because its refurbished sets, which feature CET-fitted Mk 3s as well as sliding doors (RAIL 864), are not yet ready at Wabtec Rail, Doncaster.

The RMT has written to both ScotRail Alliance Managing Director Alex Hynes and Scottish Cabinet Secretary for Transport, Infrastructure and Connectivity Michael Matheson.

RMT General Secretary Mick Cash said: “Our members are rightly appalled that ScotRail has sought to rip up a clear agreement to end the filthy and disgusting practice of dumping human excrement on Scotland’s railways. This disgraceful and retrograde step must be halted now, and the union will take whatever action is required to hold ScotRail to their agreement with the union.”
A ScotRail spokesman said: “We are working flat out to get more upgraded trains into service as quickly as possible, but our supplier - Wabtec - is behind schedule and has let us down. To ensure we can deliver services for our customers, we will introduce classic High Speed Trains until enough upgraded Inter7City trains are available. These classic trains will not have retention tanks, which is far from ideal. We are doing everything we can to mitigate this as soon as possible.”