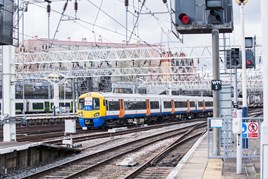 The role of ticket offices on London Overground is to be reviewed, in a move criticised by the RMT union.

Transport for London and Arriva Rail London have announced a series of plans to “review and modernise customer service” on LO. Both have reviewed TfL’s Fit for Future Stations programme from London Underground, to ensure all lessons have been learned from that rollout.

A review of the role of the ticket office is being considered on a station-by-station basis, while upgrading ticket machine functionality across the network is being explored in response to the growth of contactless ticketing. ARL plans to meet staff and unions to discuss the plans, and will consult with London TravelWatch. It said there is no need for compulsory redundancies.

Jonathan Fox, TfL’s Director of London Rail, said: “Over the years we have seen significant changes to how customers use stations and pay for travel. This exercise will enable ARL to consider how best to respond to these, and make sure the Overground retains its position as one of the best train services in the UK.”

ARL Managing Director Will Rogers said: “As the London Overground network has grown, our staff have been instrumental in adapting to customer trends, new technology and ways of working that benefit customers, communities and employees. There is no doubt that TfL’s vision for the Overground is both strong and ambitious, and so we will work closely with them to achieve a joint goal of meeting the ever-changing needs of our customers and communities.”

However, RMT General Secretary Mick Cash said: “RMT is deeply concerned about the proposals, which in our view could see the elimination of ticket offices across London Overground.
“These plans have a striking similarity to the Fit For The Future model rolled out on London Underground stations, which meant wholesale axing of ticket offices and a net loss in safety-critical jobs, and which sparked a long-running union industrial and political campaign that eventually reversed a ‎sizeable chunk of those cuts.”

ARL is considering increasing the number of staff directly employed in permanent roles, and reducing reliance on agencies to cover customer service positions. It said these would be multi-functional, with staff skilled in different areas of customer service.

It said all stations would remain staffed at all times that trains are running, and plans to upgrade customer information through technology. The number of staff employed in permanent mobile revenue protection and security roles across the LO network is planned to treble by early 2019.