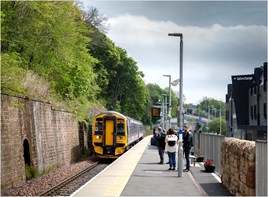 The Scottish Borders needs a through route to maximise the potential of the region’s economy, according to a report by the Campaign for Borders Rail (CBR).

The Summary Case for a New Cross-Border Rail Link was published on May 30, and was being distributed to parliamentary candidates ahead of the General Election. It sets out the CBR’s commercial, social and economic cases for a new railway linking the existing Tweedbank terminus to the West Coast Main Line at Mossband, just north of Carlisle.

CBR says the costs of reinstating the railway are a matter of future feasibility studies, but adds that at 2012 prices rebuilding the 56-mile line would cost £644 million. Of the reopened link, 41.5 miles are in Scotland and 14.5 miles are in England. CBR says that 96% of the disused trackbed remains unobstructed.

“This document will help inform the debate on preparing for the proposed railway through the Scottish Borders to Carlisle and beyond,” said CBR Chairman Allan McLean.