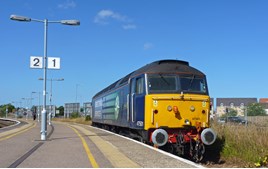 The number of platforms at Great Yarmouth will be cut from four to three as part of the resignalling and remodelling deal signed in August (RAIL 834).

Network Rail has agreed a £29 million programme that involves the removal of seven signal boxes, as well as the conversion of gated level crossings into automatic crossings.

As part of the work, there is track remodelling at the Norfolk coastal town, with Platform 1 (the shorter bay platform) being removed, although the lesser-used Platform 4 will remain.

NR spokesman Katie Mack also confirmed that the station’s run-round facility will remain via the ground frame between Platforms 2 and 3, and a new signal will be installed near the A47 bridge that is to be widened as part of a road improvement scheme.

Mack said the ground frame will remain locally operated, but it will be interfaced with the new signalling system and electrically detected to improve safety.