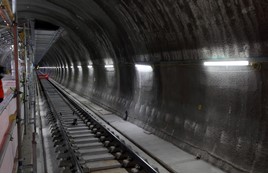 Concerns about whether the central section of Crossrail would open in time were raised by then chairman Sir Terry Morgan in a meeting with the Mayor of London and Transport for London (TfL) on July 26 - a month before the decision was formally taken to delay the opening until next year.

The release on December 10 of Crossrail board minutes and meetings with the Mayor and TfL reveal that in a presentation given by Crossrail, the December 2018 opening date was said to be at “high risk”.

This was due to a late start of dynamic testing following a voltage transformer failure in November 2017; “challenges” to completing the fit-out, testing and commissioning of the infrastructure; rolling stock that was “less tested and stable than planned for”; insufficient testing time remaining; and poorer than planned productivity.

The presentation created three scenarios for when Crossrail might open, with the latest expected to be August 2019. The Mayor of London’s office said in a lengthy breakdown of meetings issued on the same day that “the Mayor is verbally briefed by Crossrail that it would be well before that ”.

At the Crossrail board meeting of July 19, Chief Executive Simon Wright had acknowledged “significant pressure” on the amount of work left to complete in the time available. Problems were highlighted with signalling software, while less than half of the project milestones required to be delivered by the time of the board meeting had been done.

In a briefing note from Crossrail on August 7, it was confirmed that a revised delivery schedule for the project would be discussed with the Crossrail Ltd board on August 29, followed by the Sponsor Board on September 3 and the Mayor of London on September 6. The briefing note also highlighted the fact that radio connections supporting the tunnel signalling system were not complete, preventing full testing of rolling stock and signalling together.

In the weekly report of August 13, the Mayor of London’s office claims that the formal forecast date for the start of passenger service remained December 9. It was not until the August 29 Crossrail board meeting that the board confirmed it would not achieve the planned opening date. Since then, the revised ‘autumn 2019’ opening date has been deferred to an unspecified time.