Redundant HSTs proposed for freight/passenger use 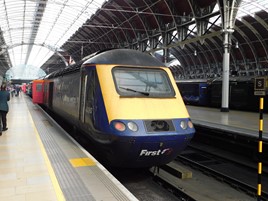 High Speed Trains could be used for mixed-use passenger and freight trains, according to Intermodality Managing Director Nick Gallop.

He told RAIL that the British Rail-style operation of newspaper trains, which also carried passengers, could be replicated using HSTs that are being made redundant by various operators.

“With a bit of rare joined-up thinking and breadth of vision, some of these services could carry passengers in dedicated or convertible spaces, creating new infill services during the day and overnight, unlocking revenue from the bus and coach industry,” he said.

“At the risk of getting into extreme nostalgia, it’s not that many decades ago that I legitimately caught a newspaper train out of London Bridge in the wee small hours, the train having a passenger compartment for fare-paying passengers among the consist.”

Gallop has spoken previously of using HSTs for such purposes. He said that in current configurations, a set provides the equivalent of between six and 12 articulated lorry loads.

Gallop highlighted how in Italy, rail freight operator Mercitalia has converted one of its high-speed passenger ETR trainsets to carry freight in roll cages, to a similar internal layout to the former SNCF TGV postal units.

“It’s not exactly rocket science, but provides an indication of what could be done with a large fleet of depreciated high-speed trainsets with an established track record and a relatively wide network coverage."