Record number of passenger journeys, but the growth slows 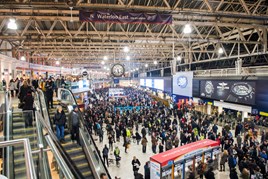 The growth in the number of national rail passenger journeys being made slowed to 0.8% in 2016-17, with 1,731 million journeys undertaken on Britain’s railways.

This was still the highest annual figure recorded since the time series began in 1950, but Office of Rail and Road (ORR) statistics published on May 25 noted that year-on-year growth was at its lowest level since 2009-10 (when the number of passenger journeys made fell by 0.7%).