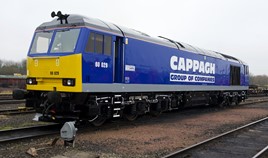 A third Class 60 is joining the DCRail fleet, having been substantially rebuilt and having undergone a ‘Super Sixty’ overhaul at Toton.

Withdrawn in late 2008, 60028 follows classmates 60046 William Wilberforce and 60055 Thomas Barnardo back into traffic on the main line. It has been outshopped in the aquamarine blue livery of London-based Cappagh Group, which owns DCR. This is to help publicise DCR’s owners and is based on Cappagh’s road fleet.

Cappagh Group Director of Rail David Fletcher told RAIL: “The Group has four railheads under development, with the sidings at Willesden ‘F’ near Wembley expected to open during 2020.

“These sites will be designed to take a minimum of 26 wagons, and the Class 60 was chosen to provide the haulage capacity to allow heavy trains to run. It is also important that we maximise the utilisation of the paths, and the Class 60 is key to this.”