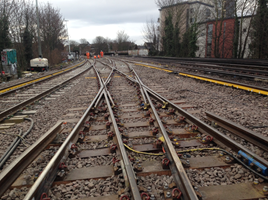 More than 50 metres of line had been damaged in the derailment. Engineers and contractors moved derailed wagons that had landed on their sides, cleared 30 tonnes of sand manually, relaid the damaged track and fitted new points, including using components built at short notice by London Underground at Earl’s Court.

Network Rail spokesman Chris Denham confirmed to RAIL that the junction where the train derailed had been replaced two weeks previously, adding it is unknown whether that was linked to the accident. He said hundreds of passenger trains and 70 freight trains had crossed the junction since it was replaced ten days prior to the accident.

The Rail Accident Investigation Branch (RAIB) is investigating the cause of the accident.