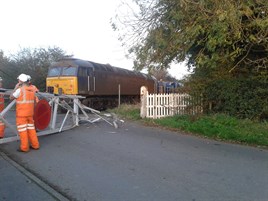 An investigation is under way after a Railhead Treatment Train (RHTT) smashed through level crossing gates at Lingwood, on the Norwich-Great Yarmouth branch, on October 31.

The accident happened mid-afternoon and RAIL understands that the RHTT was travelling at 25mph. The lead locomotive, Direct Rail Services’ 57010, was damaged after it ploughed through the gates, with the entire train passing over the crossing. Nobody was injured.

The Rail Accident Investigation Branch (RAIB) attended the scene, which caused the line to close for the rest of the day.