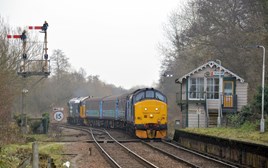 The Rail Delivery Group (RDG) says Britain’s railway has turned a £2 billion a year loss in 1997-98 into a £200 million net contribution to government in 2014-15. The findings are contained in its annual dataset on rail industry finances, performance and investment, released on December 19.

The RDG, which represents train operators and other rail industry companies, says this financial turnaround effectively means the Government’s £3.5bn annual spend on the railway is supporting capital projects.

The figures also show that passengers are paying a greater proportion of the railway’s total costs, up from 57% in 2011 to 71% in 2015. It says this is mainly due to greater passenger numbers rather than higher fares, with average fares for single journeys rising by 3% in the same period. Net payments to government have also risen, from £60m in 2010-11 to £800m in 2015-16.