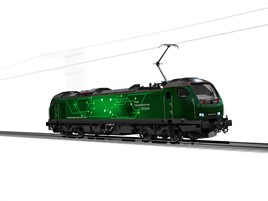 Thirty Class 93 tri-mode locomotives will be built by Stadler for Rail Operations (UK) Ltd, with the initial batch of ten due for delivery in early 2023.

The locomotive will also be fitted with a CAT-ERPILLAR C32 engine and Lithium Titanate Oxide (LTO) traction battery packs, allowing it to operate over non-electrified lines, as well as a diesel engine with a nominal power of 900 kW (1,200hp) and which meets EU 97/68 Stage V emission requirements.

The mixed-traffic locomotives are based on the Class 68 and ‘88’ locomotives, but with a higher maximum speed of 110mph.

“The Class 93 fleet, with its array of green credentials, will allow us to lead the way in supporting the rail industry deliver its decarbonisation targets. The Class 93s also allow us to develop new markets and modernise many aspects of UK train operations.”

A Railway Industry Association programme to encourage innovation, is to include the flagship ‘Innovation Conference’ on April 26/27.