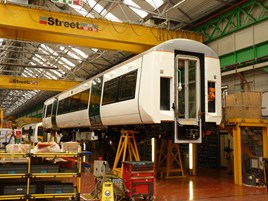 The Government is determined to ensure that investment in the rail network benefits the UK economy, Rail Minister Paul Maynard declared on July 7.

A recent study by RAIL showed that of 6,415 new train vehicles on order or in the process of being delivered, at least 3,356 will be built or assembled in the UK (RAIL 830).

In a Commons Written Reply to John Spellar (Labour, Warley), who had asked what assessment the Department for Transport makes of the merits regarding social and wider economic considerations in the placing of orders for trains, Maynard said: “Rolling stock procurement, generally by train operating companies, delivers significant economic and social benefit in the UK.”

He highlighted the £895 million deal for 750 Bombardier Aventra vehicles ordered by First MTR for South Western, and said that since 2010 Bombardier has secured orders for more than 2,800 new carriages, all of which will be built at Derby Litchurch Lane. He said 1,600 people were employed at that site.

Maynard also cited Hitachi Rail Europe’s assembly facility in the North East, saying: “Since Hitachi opened their manufacturing facility in Newton Aycliffe, over 700 jobs have been created including apprenticeships and graduate roles.”