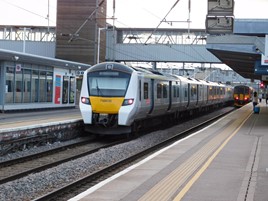 Rail accounted for 2% of all journeys completed and 9% of the total distance travelled in England in 2018, according to the Department for Transport’s National Travel Survey 2018 White Paper.

Rail was the fourth most popular form of transport (after private vehicles, walking and buses), but the second most popular in terms of distance covered. People completed around nine trips by private transport for each one on public transport.

However, rail is gaining in popularity in England. Surface rail trips per person per year increased from 13 journeys to 22 journeys between 2002 and 2018, and passengers travelled an average of 617 miles by rail in 2018 (an increase of 41% since 2002), with the average journey taking 81 minutes. Excluding London Underground, 73% of all rail trips undertaken last year exceeded ten miles.

Meanwhile, around 69% of people who didn’t drive to work (those using public transport modes, walking or cycling) reported no difficulties in their journey, although those that did cited unreliable public transport as the most common reason for the difficulty.

Commuting was the most popular reason to use rail services (47%), followed by leisure (26%) and business (9%). The most likely group of people to use rail (excluding London Underground) in 2018 were men aged between 20 and 39, accounting for 5% of total trips for this group. Men also took more trips by train than women (24 versus 21).