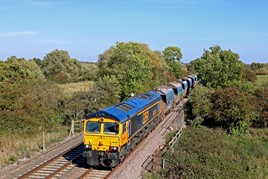 The volume of freight carried by rail rose by 3% in the first quarter of 2018-19 (April-June, Q1 2018-19), compared with the corresponding three-month period last year.

Figures released by the Office of Rail and Road (ORR) on September 27 reveal that the amount of coal carried increased by 7% in the period. This was the joint highest alongside construction.

The total amount of freight lifted rose 2% to 19.1 million tonnes. Although this was an increase on the same period last year, it was still the second lowest total for Q1 since the start of the series in 1996-97.