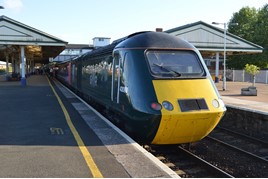 Train operating companies and the Department for Transport must “grasp the opportunity” to help expand the volume of goods transported by passenger trains, while gaining an additional revenue source.

InterCity RailFreight (ICRF) has various contracts, including taking up spare space inside Great Western Railway HST power cars to deliver fresh fish from Devon and Cornwall to London, for use in high-end restaurants.

Two to three trains a day run with GWR, although this depends on the tide and the supply of fish. ICRF claims that because of the speed of the transfer, fishermen are able to sell their goods for £4 per kg instead of the 70p per kg expected if they went to the local market.

The company has also secured space on East Midlands Trains services to carry patient samples between Nottingham, Leicester and London on behalf of a global pathology business. Up to five EMT trains carry samples between the cities, and ICRF claims that transporting samples by rail has reduced some transit times from around 13 hours to three.

“From a patient’s perspective, being able to get samples into the centre of London at speeds of up to 125mph has enabled the lab to be posting results online back to doctors in hours, not days,” ICRF Managing Director Jeff Screeton told RAIL.

“Seafood is a prime example of where the train can add value. Speed equals freshness, and offers a distinct edge for chefs looking for a better product. For the small fisherman the returns can be much higher, and that means support for local jobs and sustainable fishing.”