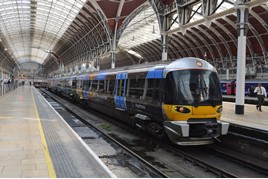 Improved rail access should be central to plans for an expanded Heathrow, according to the organisation proposing a new southern route into the airport.

Heathrow has launched a ten-week public consultation on its plans for a third runway. It includes a number of infrastructure proposals, such as tunnelling the M25 motorway below the new runway, the location of expanded terminal facilities, and three options for the length of the new runway (varying between 3,200 metres and 3,500 metres).

Graham Cross, director of Heathrow Southern Railway Ltd, said: “Even with the existing two-runway airport, there is an air quality emergency in west London to which road traffic around Heathrow contributes significantly. A third runway will make a southern rail link essential if passengers and airport workers are to access Heathrow without making this crisis even worse. The time for debate is over and the need for action is imperative.”

The southern scheme involves eight miles of new track leading into Terminal 5. It would enable trains from Waterloo via Clapham, Richmond and Staines, as well as a link to Woking and Guildford. Unlike previous schemes, trains would continue beyond Heathrow, offering passengers from Surrey and Hampshire connections to Old Oak Common for HS2 and the Elizabeth Line, and into Paddington.