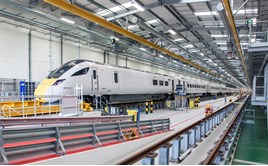 In his speech at the event in Birmingham, organised by RAIL, Burchell described the railway as the “economic backbone” of the country, and said that in uncertain times rail has the power to create secure jobs with “high skills, decent pay and long-term prospects”.

Independent analysis commissioned by the RDG shows that 24,000 more people are working for the industry and its supply chain, compared with two years ago. That represents a growth of 11%, compared with 3% growth in employment across the rest of the UK. Rail’s increase is in construction, technology and engineering roles, he explained.

Burchell also highlighted that 100,000 further job opportunities will be available in the industry over the next decade, while analysis from independent consultancy Oxera shows the industry and its supply chain contribute up to £10.4 billion in Gross Value Added each year to the British economy, equivalent to one-quarter of the UK’s entire schools budget.

“We should be proud of our role as a major national employer. Ours is a genuine growth industry for skills and jobs,” said Burchell.