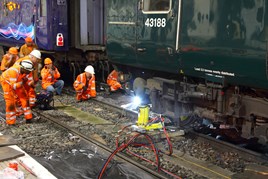 The Rail Accident Investigation Branch (RAIB) is to issue safety digests into three accidents in August.

A 4mph buffer stop collision at King’s Cross on August 15 (RAIL 834) resulted in three passengers being slightly hurt. The train and the buffer stop were also damaged.

The second safety digest will cover the August 20 derailment of a High Speed Train power car at London Paddington, which resulted in no injuries.

The final digest will examine an incident on August 22, when a track worker was struck a glancing blow by a train travelling at about 48mph between Wimbledon and Raynes Park stations. In this accident, the track worker suffered minor injuries.

All three safety digests will be made available on the RAIB website.