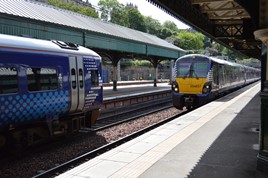 Scottish ministers say a public sector body will be able to bid for the next ScotRail franchise should they wish to do so.

Michael Matheson, Cabinet Secretary for Transport, Infrastructure and Connectivity said: “Our consistent view over many years is that there ought to be a level playing field between the private and public sector in bidding for rail franchises. We secured the right for a public sector operator to bid for a rail franchise in Scotland, after being denied by previous UK governments.

“Identifying a public sector body to make a bid has not been easy. It was vital to consider a range of scenarios as we want to strengthen competition and achieve best value for the public purse, while delivering continuous service improvements.

“It is important for any public sector bidder to have the appetite to bid; the capability and capacity to see the bid through; and the ability and resources to make the franchise a success.

"It is also our view that the Scottish Parliament and the Scottish government should have full powers to consider all options for structuring our railways to meet Scotland's needs."

In a statement, Transport Scotland said this approach will help ensure the delivery of rail services in Scotland that maximise economic and social benefit.