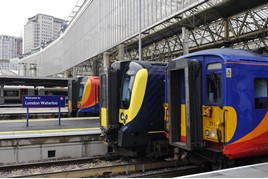 South Western Railway has cut back plans for a radical shake-up of its timetable, following widespread opposition to its proposal to halve the number of direct services between London and Weymouth, from two trains an hour to only one.

FirstGroup and MTR won the franchise from August 2017 with bold promises to cut more than ten minutes off journey times to London from Weymouth, Southampton, Portsmouth and Salisbury. It planned to achieve this partly by reducing the number of intermediate stops, which would have left some smaller stations without an hourly off-peak direct service.

During a public consultation, thousands of passengers objected to proposals across the SWR network. By far the largest number of complaints related to the Weymouth cuts, which involved one of the hourly London services being replaced by a new route to Portsmouth.

Publishing its response on April 4, SWR said: “To address the most common request, which was to retain certain stations in some of the proposed faster services, we have had to make some difficult trade-offs between connectivity and journey times.”

The operator said that reinstating the services to Weymouth would result in the loss of some, but not all, of the journey time saving. Hamworthy, Upwey, Moreton, Branksome and Parkstone would retain all-day services. Sway would retain peak direct services, but require a change at Brockenhurst off-peak.

One of the hourly Weymouth services will divide at Southampton, with the front part of the train running fast to Bournemouth and then all stations to Weymouth. The rear part will serve most intermediate stations to Poole. The proposed new Weymouth-Portsmouth train would instead run only from Bournemouth.

A plan to drop Woking and Clapham Junction stops from off-peak West of England services through Salisbury has also been reversed.

And plans to reduce the number of trains per hour at Hook, Winchfield and Fleet (4 each) and Farnborough (6) have been overturned. Direct peak services from Frimley, Camberley and Bagshot will also be retained, rather than removed.

In London, plans to cut services at Queenstown Road from eight to four an hour have been reversed. Waterloo to Weybridge via Hounslow trains will also be retained, instead of being removed.

On Sundays, a new service will operate from Salisbury to Basingstoke and Reading.

The timetable plans for December have been submitted to Network Rail, which is responsible for capacity allocation. It will assess compatibility with the requirements of other passenger and freight train operators.