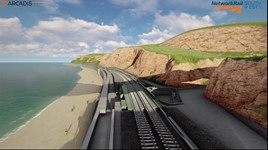 A six-week consultation is under way on Network Rail’s plans to alter the Devon Sea Wall between Teignmouth and Parson’s Tunnel.

The work involves realigning the railway and building a series of corrective measures to protect the main line from the cliffs. The public has until March 1 to help shape the final design.

NR plans to carry out the project following the catastrophic wall failure at Dawlish in February 2014 that cost the South West region some £1 billion in lost business (RAIL 743).

The updated plans allow most of Teignmouth beach to be retained, alongside the creation of new, fully accessible coastal walking routes.

Parson’s tunnel is the first of five between Teignmouth and Dawlish, and NR has long argued that the cliffs pose a significant risk to the railway due to their condition and the risk of collapse. A new metre-wide footpath is part of the plan and will have edge protection.