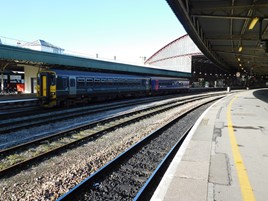 Network Rail is continuing preparations for completion of the £130 million resignalling at Bristol Temple Meads, with the station closed from March 30-April 4.

Much of the attention will focus on testing and commissioning, but in the first three shifts of the project plain lining of two point ends will take place, in addition to installation of remaining structures and signals that could not be installed earlier owing to constraints imposed by old signals and track circuits.

Testers will focus initially on the changeover from the existing E10K interlocking to the new Smartlock equipment. The interface to the Stoke Gifford ‘fringe’ will also be updated, and seven other fringes will be changed over and tested.

A team of 40 testers will be working round the clock during the blockade, and a joint management team of Network Rail and Alstom staff will oversee the work.

The works at Bristol form Phase 4 of the wider Bristol Area Signalling Renewals and Enhancements scheme, and will be completed ahead of Phase 3, which covers the Bath area. This is planned for completion on April 19.

In addition to the resignalling, preparations are also taking place for the Filton Bank quadrupling, which is due to be completed by the end of 2018.

This project comprises the creation of a fourth platform at Filton Abbey Wood station, six major earthwork sites to create a new trackbed, installation of ten miles of plain line track, 12 switches and crossings, and three miles of track drainage.

Six underbridges, a new viaduct and three footbridge improvements are due to take place, as well as repositioning of two GSM-R masts and works to around 30 signalling structures. Route clearance works are also required on ten structures.