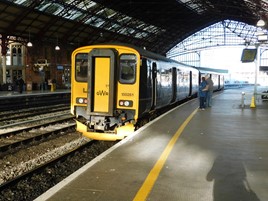 A Development Consent Order (DCO) to reopen the disused 3.45-mile Portishead branch has been submitted by North Somerset Council (NSC) to the Planning Inspectorate.

The project forms part of the MetroWest Phase 1 scheme that will upgrade the Severn Beach and Bath Spa-Bristol routes to operate a half-hourly service and reopen the Portishead line with an hourly service. Reopening the route is expected to cost in the order of £112m.

Services would diverge from the existing freight-only branch from Ashton Junction to Royal Portbury Dock at Pill Junction, over the formation of the former branch line to Portishead which closed to passenger traffic in 1964 and to freight in 1981.

The route was reopened as far as Royal Portbury Dock in 2002. Although track remains in place on the disused railway to the outskirts of Portishead (where a new station will be built), it and the ballast will have to be replaced.

New single-platform stations are to be built at Portishead and Pill. Both will be able to accommodate five-coach trains, although initially only three-coach trains will be used. Trains will run to Bristol Temple Meads.