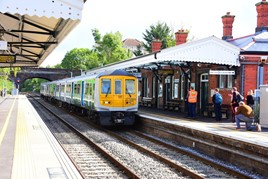 Porterbrook’s HydroFLEX 799001, converted from a Class 319 electric multiple unit (319001), made its first trips between Long Marston and Evesham on September 21, before being shown to Secretary of State for Transport Grant Shapps on September 29.

The Class 799 carried its first passengers at Rail Live 2019, when it was used on demonstration trips at the event. The first production trains could be ready by the end of 2022 or early 2023.

HydroFLEX has been supported by a £750,000 grant from the Department for Transport, while more than £1 million has been spent on the project by Porterbrook and the University of Birmingham Centre for Railway Research and Education (BCRRE).

The ‘799’ uses hydrogen and oxygen to produce electricity, water and heat. Its hydrogen equipment is currently fitted inside one of its four vehicles, but the production trains will have hydrogen rafts fitted below the solebar.

Porterbrook spokesman Rupert Brennan-Brown told RAIL on September 30 that one of the advantages of using ‘319s’ was the amount of space they have below the solebar. Work is under way on developing the raft, which could also include batteries.

He explained: “There is significant interest in hydrogen trains in Teesside, Scotland and the West Midlands area and we are discussing options with our customers.”