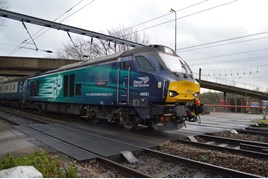 The charter acts as a farewell for ‘68s’ with GA. The locomotives have been in use with the operator since July 2016 as cover for unavailable diesel multiple units, but that ends on September 8.

This will be the first time a Class 68 has hauled a passenger train into Liverpool Street. Identities have not been confirmed, but it is hoped that at least one will be a brand new locomotive. Currently 68001 and 68028 are on hire ro GA, with 68001 entering traffic on September 6. It is hoped that another '68'may be sent south for the train.

It is planned that the charter will leave Norwich at 1020, Ely at 1155, Norwich at 1333, and arrive at London at 1534. It is booked to leave the capital at 1624, arriving back in Norwich at 1821. Light refreshments will be available on-board throughout the day.

There will also be opportunities for cab rides on the Norwich-Ely and Ely-Norwich legs. These are available via bids on the website, with the winner being highest bid received by September 10. All money raised goes to EACH.

Jonathan Denby, Head of Corporate Affairs for Greater Anglia, said: “We’re delighted to be running this special Class 68 railtour for East Anglia’s Children’s Hospices. It’s an extremely worthwhile cause focused on the region we serve and supported by many of our employees.

“Taking in two routes on which the Class 68 locomotives haven’t been operating passenger services, we hope it will be very popular and generate an impressive contribution to EACH funds.”