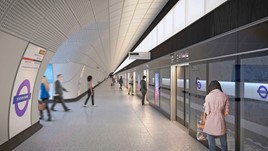 London Assembly Transport Committee leader Caroline Pidgeon says non-standard height platforms on the central section of the new Elizabeth Line in London will make journeys “unnecessarily complicated and burdensome” for those with disabilities.

Platforms in the central section of London’s new east-west line (Crossrail) have been built to a height of 1,100mm in order to offer step-free access to board the Bombardier-built Class 345 EMUs.

However, the national standard for platform heights is set at 915mm and that height is widely accepted among rail safety bosses as being the safest platform height in Europe, with all new-build platforms required to be built at a height of 915mm.

Pidgeon told RAIL: “Crossrail will deliver wonderful new trains, 200 metres long, the same length as two football pitches. And thanks to extensive campaigning every station that runs through London will have step-free access. It is, however, a huge disappointment that there will be no consistency in platform heights along the whole of the route, making journeys for people with disabilities unnecessarily complicated and burdensome.”

A Department for Transport spokesman told RAIL that Crossrail did not receive a derogation to build the platforms at a different height to the national standard, but confirmed that the Secretary of State of Transport issued a dispensation under Regulation 46 of the Railways (Interoperability) Regulations 2011 in order to build the platforms higher. This meant neither the Office of Rail and Road nor Transport for London needed to be consulted about the change.

A ‘Serious Game’ virtuality reality simulation is being developed to support disabled people to better access travel on Northern’s services.