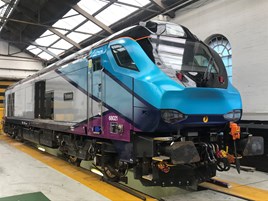 TransPennine Express has released an image of 68021 Tireless in the operator’s new livery.

The operator will use 68019-68032, sub-leased from Direct Rail Services, to operate trains between Liverpool Lime Street/Manchester Airport and Scarborough/Middlesbrough from next summer.

These trains will operate in push-pull mode using rakes of Mk 5s currently being built by CAF. There are 66 new coaches under construction including Driving Trailers. These will also enter traffic from next year.