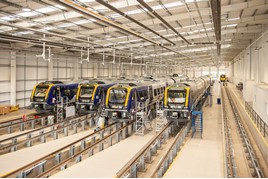 More than two million passenger journeys have been made on Northern’s CAF trains since the first units entered traffic on July 1.

As this issue of RAIL went to press, 33 of the 101 trains were in traffic. More were due into service as crews completed their training, and the trains completed fault-free running trials.

“Our network is busier than it has been for a generation, with more than 100 million passenger journeys set to be made across the franchise this year.