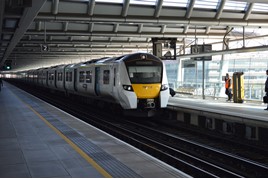 The number of passenger journeys made on franchised train operators fell by 1.4% to 1.7bn in 2017/18, led by a 9.2% fall in season ticket journeys, according to the Office of Rail and Road’s latest figures released on June 14.

Passenger journeys in London and the South East fell by 2.1%, and although the Long Distance and Regional sectors continued to grow, the rate has slowed to less than 1%. The rate of growth in passenger-kilometres (0.3%) and passenger revenue (2.3%) is the lowest since 2000/01, when disruption following the October 2000 Hatfield derailment hit growth.

The ORR’s statistics show that while Govia Thameslink Railway had the largest number of passenger journeys at 319 million, this figure was 2m less than in the previous year, with industrial action, staffing problems and planned cancellations all contributing to the fall. South Western Railway was also affected, with its total journeys falling by 18m, with engineering works, industrial action and transfer of the franchise all having an effect. Chiltern Railways, meanwhile, recorded an increase of 6.4% in passenger journeys, and ScotRail its highest growth rate – 3.8% - since 2014/15 and an increase of 3.5m journeys.

In terms of revenue growth for the year, the Regional sector topped the list with a rate of 4.2%, a small increase on the year before, but the Long Distance sector continued its revenue growth slowing to 2.8%. London and the South East increased slightly to 1.3%. Revenue from season tickets declined by 4.6%, but that from Advance fares grew by 9%. Revenue per journey was £5.66, up 3.7% on 2016/17, and revenue per passenger-kilometre increased by 2% to 14.72p.

Rail Delivery Group Chief Executive Paul Plummer responded to the figures saying: “There are over 1.7 billion rail journeys made every year and despite some slowing down, this growth isn’t expected to hit the brakes in the long term. While technology may mean fewer people are travelling into work every day, anyone taking the train into our major cities will know that investment to run more trains is essential.

Andrew joined RAIL in 2000 as a news and features writer. He has written four books, covered the UK and international rail industries, and led 2005’s successful campaign to save the ‘Night Riviera’ sleeper train. He is also a regular commentator on rail matters on television and radio for RAIL.

Nine-car Class 345s withdrawn from traffic by TfL Rail, with no date for their return yet announced.