Pacers to continue running in South Yorkshire into next year 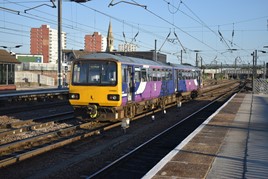 Pacers will continue to operate in the South Yorkshire area, Northern has confirmed.

The operator had planned to remove its 102-strong fleet from traffic by the end of the year, but has now been forced to retain its 23 Class 144s into 2020 owing to late delivery of the CAF Class 195 and ‘331’ units as well as ongoing delays to the Class 769 FLEX project.

Senior sources, speaking to RAIL on July 22, said that the ‘144s’ were being retained as they are slightly more modern than the ‘142s’, and have better interiors.

The fact that they are all maintained at one depot (Neville Hill) is another reason, as is keeping them on the duties they operate now as Northern needs to continue training drivers on its new train fleets.

In principle, the plan is for the ‘144s’ to operate short-distance services in the Sheffield area, with a planned run-down of the fleet so that they are all withdrawn by the middle of the year. An exact date has not been revealed.