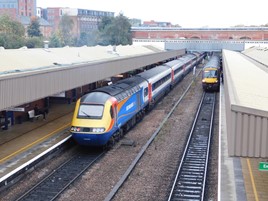 Rolling stock is generally privately owned, and it’s a matter for the owners to determine the future opportunities for their assets once they are no longer in passenger service, according to Transport Minister Andrew Jones.

He was responding on January 30 to two Commons Written Questions from Paul Girvan (Democratic Unionist Party, South Antrim), who had asked what proportion of trains are wholly or partially re-purposed, or scrapped, and if Government was publishing any guidelines for re-purposing displaced rolling stock.

Jones’ comments were made despite the Department for Transport declaring that bi-mode trains would be manufactured for the East Midlands franchise from 2022.

So far, no contract has been awarded for these trains, nor has there been a resolution to the future of the High Speed Trains that the new fleet will replace. As it stands, the HSTs must be withdrawn by December 31 as they do not meet disability guidelines. Owner Porterbrook had offered to have the work completed on the sets, but received no assurances from DfT and so missed out on the work being completed on time.

Class 455s and ‘458s’ for South West Trains were heavily-modified for a Government-sponsored High Level Output Specification (HLOS) plan, as well as 30 five-car ‘707s’ being ordered, only for DfT to then award a new franchise to First Group/MTR that means these EMUs will be withdrawn.