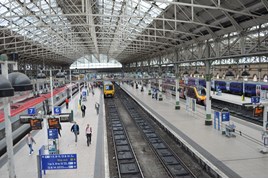 Former Chancellor of the Exchequer George Osborne has reiterated calls for the Government to build the so-called High Speed 3 railway from Liverpool to Hull.

He has been backed by Secretary of State for Transport Chris Grayling, who in the Yorkshire Post on August 22 acknowledged that poor transport is “holding it back”. Grayling added: “Although one of my biggest priorities… is to build the transport links the North needs to thrive, they must be designed and managed by the North itself.”

Grayling says he wants Transport for the North (TfN) and other Northern bodies to come forward with fully costed proposals to improve journeys for transport users, adding: “We have given TfN £60 million to develop proposals for the scheme , and are working with them to strengthen the business case for the line.

“The success of Northern transport depends on the North itself - on TfN, businesses, mayors and devolved authorities, and on local communities. They understand the North’s transport problems better than anyone, and with their knowledge can fix them.”