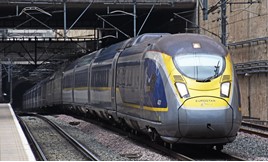 The Office of Rail and Road says renewals charges on High Speed 1 should be £12 million less than the line’s operator proposes under the 2019 Periodic Review.

HS1 wants to charge operators £38.2m per year for the five-year Control Period 3, which runs from April 1 2020 to March 31 2025, but the regulator believes that addressing its concerns could bring the final figure down to £26.1m.

In its draft determination published on September 30, the ORR says it proposes to accept the majority of HS1’s proposals, but that it does not accept certain aspects of its plan. These include: