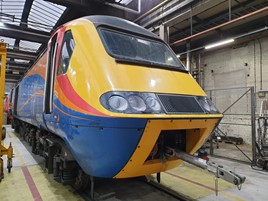 A production High Speed Train power car is to be fitted with an original Valenta power engine, after 43044 was secured by the 125 Group.

The former East Midlands Railway Class 43 is currently stored at Neville Hill, having been withdrawn earlier this year. It is fitted with a VP185 engine, but that is defective.

Longer term, it’s planned that an MTU-fitted Class 43 will be acquired.

The Group has also acquired two more HST Mk 3 coaches, meaning that it has a set of eight that it can use. One of the two new purchases is planned to be used for spares, although depending on its condition it could yet be returned to service.