On board the Progress Train 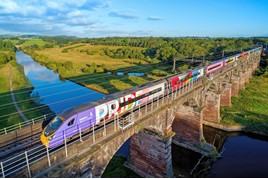 Covering an entire 11-car Pendolino set, the Trainbow takes the colours of the ‘Progress’ flag in addition to the familiar six-stripe, red, orange, yellow, green, blue and purple design. The ‘Progress’ flag adds black, brown, pink, light blue and white stripes to this, recognising that more work still needs to be done to improve diversity and equality within the LGBTQ+ community - specifically for those who are BIPOC (Black and Indigenous People of Colour) or identify under the trans umbrella.

The design is accompanied by a new inclusion campaign from Avanti: Live Proud. It’s a campaign that recognises that Pride is for everyone, every day, and it’s accompanied by a page on Avanti’s website setting out the manifesto for change. It’s worked with a number of different LGBTQ+ groups to bring together resources for staff and customers alike, setting out to answer a number of frequently asked questions about Pride and Trainbows, and how they relate to Britain’s railway network.

Trainbows aren’t a new concept. They have slowly been spreading across the rail network since 2015, when London’s Docklands Light Railway unveiled a rainbow-wrapped train as part of that year’s ‘Ride With Pride’ campaign.

Since then, we’ve seen a number of operators taking up the mantle, with a variety of different, eye-catching designs making their way around the majority of Britain. We’ve also seen significant off-train efforts from Transport for London and Network Rail, with the former’s iconic roundel being transformed into LGBTQ+, transgender and bisexual Pride flags, while the latter has displayed vibrant banners across its stations, and event-wrapped a mobility buggy at Paddington Station into a vibrant ‘Buggybow’ design.

Elsewhere, the ‘Progress’ flag has become more prominent in recent months, to raise awareness of the urgent need for intersectional inclusion and diversity and to champion some of the most vulnerable members of LGBTQ+ communities. In short, the ‘Progress’ flag acknowledges that we still have a long way to go.

By adopting this flag, Avanti has created a dynamic, long-reaching campaign that will be as relevant in ten years’ time as it is today. And, given that Avanti takes its name from the Italian word for forwards, there’s little chance that this is a coincidence.

What’s more, the colours of the Pride flag adorn each and every carriage, while the driving cars feature the word ‘Pride’ at full height. It’s a significant landmark moment for the entire rail industry, and the positive buzz that has already been created is remarkable.

Not content with just running a rainbow train up and down the network, Avanti has also launched a competition for a member of the public to name the train, with submissions being accepted via Avanti’s website until September 13. The winner will be invited to the naming ceremony as a VIP, with their entry proudly adorning the side of the train.

This is where The Progress Train comes in. The Progress Train is a grass-roots campaign to open up a wider dialogue about LGBTQ+ diversity and inclusivity across the rail industry, using the opportunity presented by Avanti West Coast to change the way that we view such matters and without being limited to any one operator.

It’s a chance to look at best practice, and to share tips and advice between different operators while also receiving and sharing real-world feedback and experience that matters to passengers and staff alike.

Within hours of launching, Avanti’s train-naming competition attracted suggestions for plenty of famous figures, living and dead. Alan Turing, Marsha P. Johnson, Sir Ian McKellen and Paris Lees are all fantastic and deserving individuals, but who risk narrowing the appeal of this vehicle for inclusivity by centering it around a single individual or identity.

The Progress Train believes that we need a name for the train that is entirely inclusive of everyone, and that’s why we suggest Progress.

Progress is for everyone, embracing all members of the LGBTQ+ communities and our allies. It inspires everyone to learn, to explore and to do better. Progress never stops - it will be as relevant in ten years’ time as it is today.

Progress is a transient state - it’s dynamic, it’s changing. It looks back to what’s already been achieved, but it also looks forward. It recognises how far we’ve come, but that we still need to do more to reach true equality, diversity and inclusivity across the rail network. But it also relates to the journey. As Avanti is to go forwards, Progress is to travel. It’s to learn. It’s to grow. But most importantly, Progress is about having a conversation. It’s about being open and transparent about not just the LGBTQ+ community, but all who use the railways in 2020.

It’s about recognising that no matter how much we, as individuals and organisations, have already done, we can always do more. And it’s about understanding that we can all continue to grow and learn - that what may have been best practice ten years ago is no longer the case.

Together, we can bring The Progress Train to Britain’s railways.

Find out more at theprogresstrain.co.uk.

LGBTQ+ is the overarching term for the Lesbian, Gay, Bisexual, Trans and Queer community, with the + sign recognising all of the additional components that make up such a broad category. The letters I (intersex), A (asexual) and P (pansexual) may also sometimes be included.

The rainbow flag first appeared in 1978 and had eight stripes, with each colour assigned a specific meaning. With demand rising for the flags, the colours were rationalised to the more familiar six in 1979, which remained the de facto Pride flag until 2017.

That year, organisers of Philadelphia Pride added black and brown stripes to draw attention to the additional challenges faced by BIPOC (Black and Indigenous People of Colour), and a year later the Progress Flag was born.