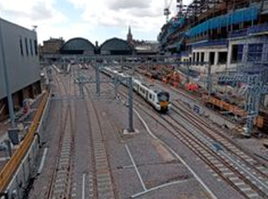 Lessons learned from the £260million King’s Cross remodelling project could serve as a blueprint for how highly disruptive works are carried out at other major stations.

That’s according to Network Rail’s East Coast Upgrade Programme Sponsor Ed Akers, who plans to lead a ‘national roadshow’ to share the findings of an internal project review with colleagues from across the industry.

The review is currently in progress as King’s Cross approaches the end of a three-month partial closure.

A reduced timetable has been in place since February 26 to allow half of the station’s platforms to be closed at any one time for demolition, reconstruction, asset renewal and signalling changes.

All platforms are due to reopen on June 7, when a new simplified track layout will be in operation to reduce congestion and allow for increased line speeds for trains arriving and departing.

The four-track station throat has also been expanded to six, by reopening the eastern bore of Gasworks Tunnel for the first time since 1977 (RAIL 930).

Akers believes that one of the key learning points of the project will be its highly collaborative nature. He said that passenger disruption had been minimised by a highly effective communications campaign run jointly by Network Rail and train operators including Govia Thameslink Railway and LNER.

He also pointed to the careful co-ordination that had been required to plan and execute 14 different timetable changes in the past 14 months, and to deliver more than 2,000 joint driver training days on the new layout.

In terms of the less successful elements of the project, Akers said a core lesson would be “how you put the passenger objectives in at the early phase”.

This is believed to be a reference to NR’s difficulty in securing agreement from train operators to the level of disruptive access that was needed. NR had originally planned to commence the three-month partial closure in January 2020. But this had to be postponed by 12 months, in order to allow more time to finesse the passenger handling strategy and to provide additional capacity on alternative routes into central London.