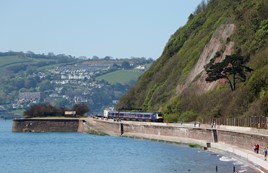 Network Rail is spending £15 million worth of Government money on a series of studies to establish what must be done in the next 100 years to keep the railway line through Dawlish and Teignmouth running.

As part of the project, ultra-high definition drone footage is being taken above the coastal line to help engineers build a model of the cliffs. Also, groundwork and surveying investigations will help to establish the business case for upgrading the line.

“I see the resulting work as being a package of works over a number of years,” Network Rail’s Western Route Managing Director Mark Langman told RAIL at one of the sites - Parson’s Tunnel, near Teignmouth.

“What we are doing is basing our work on a 100-year plan - taking into account things like climate change, what we know and what we’re forecasting. So it won’t be one big bang project, it will be a staged package of works, prioritising on key sites.”

Although Langman could not comment on the work that needs to be done to keep the line running through to Penzance, he ruled out building a ‘Dawlish Avoider’ line (the idea proposed by Plymouth Sutton and Devonport MP Luke Pollard, RAIL 852).